The Economic and Financial Crimes Commission (EFCC) says it has made recoveries totalling over N117 billion since the beginning of 2019.

The acting EFCC Chairman, Mr Ibrahim Magu, who disclosed this on Thursday in Abuja, said the commission recovered N239.16 in 2018.

Mr Magu made the disclosure during his appearance before the House Committee on Anti-Corruption and Financial Crimes, to give an appraisal of EFCC’s 2018 budget performance and defend its 2019 budget proposal.

He also revealed that the anti-graft agency obtained 313 convictions in 2018 while more than 190 convictions have been secured since January 2019.

“In the first quarter of 2019 financial year, the commission made recoveries which include cash recovery of N140.7 million, direct deposit of N2.021 billion, tax recoveries of N7.20 billion, subsidy recovery – N3.06 billion, and USD recovery of $292 million,” the EFCC chairman said.

Magu, however, identified incomplete budgetary releases as a major reason for the inability of the agency to meet its needs and obligations.

He appealed to the House Committee to increase the budgetary allocation for the EFCC in 2019, in order to carry out its duties effectively. 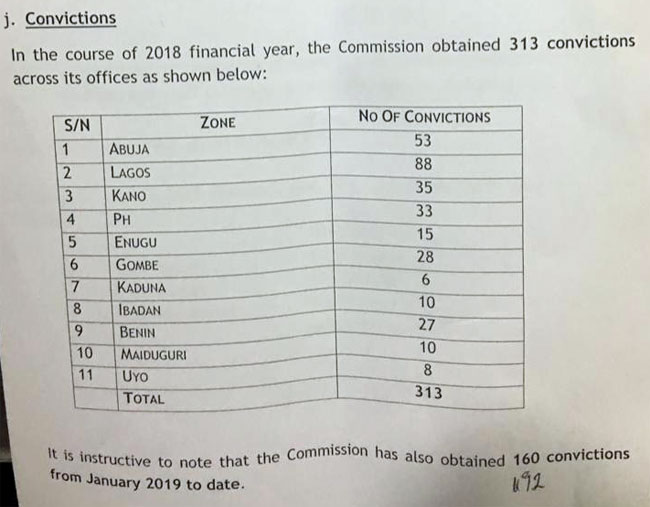 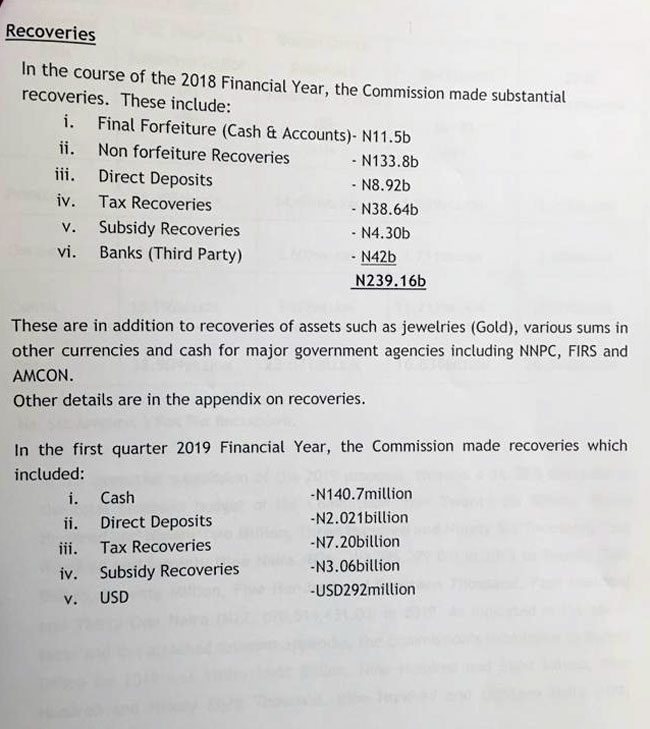 The Director of the Nigerian Financial Intelligence Unit (NFIU), Mr Modibbo Hamman-Tukur, also appeared before the committee to defend the budget of the agency.

He outlined some of the objectives the NFIU has to meet following the lifting of Nigeria’s suspension from the Egmont Group.

Hamman-Tukur informed the lawmakers that the 2019 budgetary proposal for the agency was insufficient as it needed adequate funds to effectively carry out its role.

The Chairman of the House Committee, Kayode Oladele, promised the EFCC and NFIU that the lawmakers would consider their requests.

Earlier, he welcomed them to what he said was the last defence session of the 8th National Assembly and gave an overview of the committee’s work.