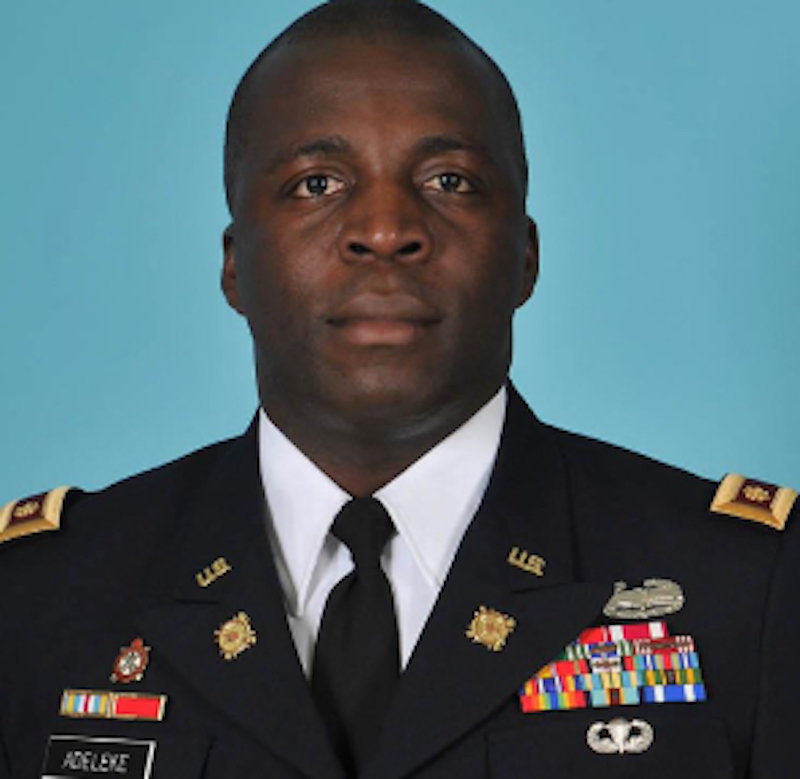 Major Adebayo Adeleke, a retired seasoned combat veteran of the United States Army with 20 years of service. In this interview with Sunday Okobi, the Nigerian-US citizen, who serves as the president and CEO of Adebayo Adeleke LLC (AA LLC), an organisation that provides advisory and training services in supply chain management, governmental services, and leadership, talks about the political and socio-economic evolution of modern Nigeria

As a global citizen who has contributed greatly to conflict prevention, management, and resolution, are you worried that Nigeria is apparently in perpetual conflict, especially as the general election draws closer?

Globally, institutions have contributed to conflict prevention. We can go far back to cite the example of the Oyo Empire when the Oyomesi provided institutions both on the legal, and political side for the Alaafin. There’s always an institution behind every style of government. Weak institutions get attacked. Nigeria is a prime example of a country with weak institutions. Our democratic institutions are weak. The government only asserts itself as necessary. I always tell someone if you want to see if the Nigerian government exists, try to mess with them or meddle with their power. This is very selective, and when an institution selects how and who to fight, there’s a problem. Since its inception, Nigeria has not enjoyed a stretch of peace. This perpetual conflict will be never-ending until there is a well-defined institution and democratic structure.

As a Nigerian who retired from the United States Army as a Major, and rose to the top of his career, how did you get to that enviable height? Briefly tell us about your journey so far.

It’s been a journey. I was born in Ilesha, Nigeria, and for some who are not familiar, Ilesha is an ancient city in the South-Western part of Nigeria. I grew up and spent most of my formative years in Ile-Ife, Osun State. I spent a few years at the Adventist Seminary of West Africa, which became Babcock University in the late 90s before joining the United States military.

Before joining the US military, my father worked in the United States, but he returned to help rebuild a hospital in Ile-Ife. As the situation in Nigeria grew dire, he traveled back to the US in the early 90s and came back for the rest of us. This was my first trip to the United States. I came back to Nigeria and tried to comply with my father’s intention for us to complete our education in Nigeria. I could not finish at the Adventist Seminary of West Africa but later completed my studies during my career in the United States military.

I was inspired to join the military while watching baseball. I saw an ad from the US military during a baseball break that said ‘be all you can be’. I saw this ad, joined, and found a cause greater than myself. I discovered a group of people willing to fight for a country, and this is the greatest education I have ever had and has made me into the man I am today. My military training triggered some attributes embedded in me. It showed me a world I hadn’t seen before. I traveled around the world, worked in different locations, and enjoyed different cultures.

People have always asked me: ‘why did you choose to be an officer?’ The story begins. I had always wanted to be an officer, but In 2005, I was stationed in Okinawa, Japan, (I was still a Sergeant then ). Every time we passed through the gate at the Kadena Air Force Base, I saw how people saluted the officers in front of me. Going through the gate and seeing the salute made that dream more daring.

I had completed most of my requirements by the time I arrived in Okinawa, Japan, but the salute at the gate made me proceed with vigor. I became an officer and got commissioned later in 2005 after spending seven years in the military, and the rest is history.

It has been 20 colorful years in the military. It consisted of ups and downs; many travels…being deployed to different parts of the world, and experiencing different cultures. I retired in 2018 to pursue other areas in consulting, supply chain, and leadership, and to engage the world as a different man and from a different perspective.

So what is your general impression of what is happening in the polity as the
2023 election approaches? Or what has been your impression of the process?
Are you impressed with the quality of aspirants from the two major political parties?

I think it’s becoming a selection process rather than an election process. It is made for the rich. If you cannot raise a particular amount of money, then you can’t contest. This is especially sad because the economy is poverty-ridden, and people who have what it takes to lead in different jurisdictions may not be able to because the democratic process is expensive. There should be an institutional structure to give everyone a chance to fight and dog it out for the common interest of people and the common good. The candidates we are seeing have been in the political eye for the last 20 to 30 years, and it’s unfortunate. I also don’t think they are ready for the new level of governance. Nigeria needs a progressive and visionary leader. Unfortunately, none of these aspirants look like this person.

In all the dynamics you have looked at, how ready are the youths to participate in the process? How can Nigeria move forward? How should Nigerians get involved to ensure we get the right leaders?

Nigerian youths are intelligent and equally capable. They have the potential but require guidance. Going to school and having the understanding of the Western or Eastern way of doing things alone cannot help you lead Nigeria or any African country. Africa has its institutional landscape, and it is vital to understand it. A lot of the youths live in urban centres. They’ve never attended ward meetings and don’t know what local government offices look like. How can you successfully reach and understand different communities in the rural areas without these basics?

Do you think that zoning and rotational arrangements are the best way forward for Nigeria? Where do competence and capability come into play?

I understand why they are doing it. Nigeria is not a monolithic environment. So you want to diversify to make it inclusive. However, the idea of zoning and rotation has led Nigeria to where it is today. If Nigeria wants to be a country, it has to shed that regionalization idea to become one; else regions should go their separate ways. It is better to bring the best leader out. This leader should be able to discern that he should surround himself with people from different parts. I know that a more progressive part of the country will produce more leaders, and that can cause some people to feel disenfranchised and marginalized, so there has to be a balance. If everyone is developing equally, however, that won’t be a problem.

Millions of Nigerians have been displaced as a result of the Boko Haram insurgency in the North, the IPOB scourge in the South-east region; bandits in the Northwest, and the people from these regions will most likely not be in their electoral districts in 2023. What can be done to prevent these people from being politically disenfranchised by circumstances beyond their control?

It all boils down to institutions and accountability. Currently, it seems like people are getting displaced, and nobody seems to care. It’s a dog-eat-dog world in Nigeria, and everybody has to fight for themselves. Yet, if we don’t take care of the disenfranchised, they can become resentful and come after us. That creates another set of problems. A lot of the extremism and terrorism we are witnessing today is as a result of neglect. The solution is to re-integrate, protect and support displaced citizens so they can engage and be part of Nigeria as a construct. This re-integration must avoid cultural dissonance.

The National Assembly has passed the Electoral Act Amendment Bill. One of the provisions allows INEC to transmit election results electronically. Do you think that that will reduce practices like vote-buying, and ballot box snatching among other electoral vices?

Ideally, it should, but how can we have that when there’s no power or network coverage in most voting booths? How do we also deal with cyber security and other electronic challenges? Until these institutions are well enshrined, I don’t see this amendment happening. Implementing the bill without fixing the issues will only create more problems. Voting can be challenged, and once the electoral commission cannot give good authority that all votes were properly protected, the process will drag.

Let’s move away from politics to issues of leadership. What is the best leadership advice and lessons you have learned from your years in the US Army?

My best advice is to lead from your heart. Managers use policies and procedures, leaders lead from the heart. This is why it is necessary to build leaders for exposure, experience, learning, and reading so that when the time comes to make decisions, these leaders can do so with the information given to them while considering all valuable options to make the best decision to bring advantage to the people and the nation at large.

This is the best advantage that my military training has given me. Although there are policies to guide one’s decision-making process; when push comes to shove, you have to lead from your heart. If your heart isn’t in tune with the people, their concerns, and their rights, you’d make the wrong decisions. The people’s concerns are at the centre of leadership.

The N20 billion salary of workers was stolen by the officials of the state government. The Economic and Financial Crimes Commission has opened a case against the state’s officials.