PM: UK and South Africa will turbocharge growth together 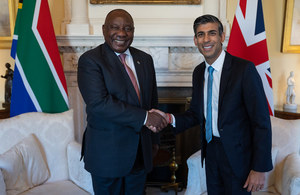 The next phase of the UK-South Africa Infrastructure Partnership is being launched today, supporting South Africa’s economic growth through major infrastructure developments and offering increased access to UK companies to projects worth up to £5.37bn over the next three years. The UK Government will also confirm new grant-funded technical assistance to South Africa to help unlock green hydrogen opportunities and boost skills in this key sector.

As an example of the opportunities for UK businesses, Globeleq – a UK company which is majority owned by British International Investment – will shortly be reaching legal close on six solar power projects, with construction expected to kick off in South Africa next year.

South Africa is the continent’s second largest economy and is already the UK’s biggest trading partner in Africa, with trade worth £10.7 billion annually. Unlocking export finance offers significant opportunities for British businesses to invest and trade.

South Africa’s President Cyril Ramaphosa is in London for a two-day state visit, hosted by His Majesty The King. After attending a state banquet for the South African delegation this evening at Buckingham Palace, the Prime Minister will welcome President Ramaphosa to Downing Street for a bilateral meeting and lunch on Wednesday.

South Africa is already the UK’s biggest trading partner on the continent, and we have ambitious plans to turbocharge infrastructure investment and economic growth together.

I look forward to welcoming President Ramaphosa to London this week to discuss how we can deepen the partnership between our two great nations and capitalise on shared opportunities, from trade and tourism and security and defence.

A new education and skills partnership between the UK and the South African governments will also promote shared learning in technical and vocational education, driving youth employment.

UK funding will build the highly sought-after technical and entrepreneurial skills in the biggest growth sectors including green technology and electric vehicle manufacture, ensuring South Africa’s youth are benefitting from the green transition.

The UK’s relationship with South Africa is hugely important to us. Together we are working to deliver for the British and South African people, creating jobs, enhancing trade and investment, and boosting inclusive economic growth.

This week’s State Visit, the first under His Majesty The King, is a fantastic opportunity to celebrate our ties but also allows us to trigger greater growth, create even more opportunities for British and South African businesses alike, and further promote South Africa’s transition to green energy.

The South Africa Just Energy Transition Partnership, launched at COP26, also offers new opportunities to collaborate on renewable technology and green innovation. The UK and South Africa are today announcing the creation of a new Partnership on Minerals for Future Clean Energy Technologies to promote increased responsible exploration, production and processing of minerals in South and Southern Africa.

Countries in the region are among the world’s leading producers of vital minerals used in clean technology, including platinum group metals and iridium for hydrogen production and vanadium and manganese for battery storage.  This partnership will utilise the UK’s expertise as the home to leading global mining houses and financial services centre for metals to bolster sustainable and responsible production.

Today we’re moving into a new era of our dynamic trade relationship with South Africa, with exciting collaboration on infrastructure, clean technology, and renewable energy sources.

These new opportunities will unlock trade and investment for businesses from the Eastern Cape to East Anglia and boost growth, create jobs and future-proof our economies against a changing world.